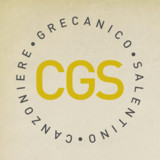 Formed by writer Rina Durante in 1975, Canzoniere Grecanico Salentino (CGS) is regarded as Italy’s leading and longest-standing world music ensemble. Italy’s fascinating dichotomy of tradition and modernity come together in the music of CGS: the seven piece band and dancer are the leading exponents in re-inventing Pizzica musical and dance traditions for today’s global audience. Starting from the ancient ritual of pizzica tarantata, said to cure the taranta spider’s bite with its frenzied trance dances, CGS shows are a life explosion: a journey from the past into modernity, and back. Leadership of the ensemble was handed down to composer, fiddler, and drummer Mauro Durante by his acclaimed father Daniele, in 2007. Durante continues to innovate, bringing decades of experience playing with global artists (Ballake Sissoko, Justin Adams, Ibrahim Maalouf, Piers Faccini, Ludovico Einaudi, Stewart Copeland of The Police). Internationally acclaimed by critics and audiences, with 20 albums and countless shows, in the world music field CGS has been awarded Best Group in the world at the Songlines Music Awards 2018.