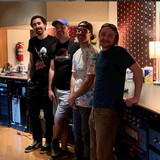 In 2008, singer and songwriter Tyler Calkins set out to create a sound reflecting the songwriting techniques of the sixties and seventies, while also utilizing modern and contemporary rock aspects. Over the years since, Tyler's unique rhythm guitar, piano, harmonica and vocals have made him one of the most sought-after performers in the Southern Tier. Having achieved his Masters degree in Performance from Pennsylvania State University as well as a PhD in Music Education at age 30, Tyler's knowledge in music, songwriting and performance is growing each day. Backed by his band, Marshmellow Overcoat, Tyler has five albums under his belt (in addition to solo and side projects) including a new Self-Titled LP, Marshmellow Overcoat, released in January of 2017.   Marshmellow Overcoat features Alan Hancock (one of the area's best guitarists) and Anthony Cavallaro (MMOC's drummer for nearly a decade) alongside Tyler. Based out of Bradford, Pennsylvania, Tyler & Marshmellow Overcoat perform most often in Western PA and NY State. With over 300 original and cover songs in its repertoire and several decades of combined experience, the band keeps people dancing, singing, and entertained show after show - Making it one of the most popular bands in the Southern Tier.   Visit marshmellowovercoat.com for more