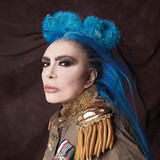 Singer Loredana Bertè was born September 20, 1950, in Bagnara Calabra, Italy. Over the course of her long career she is credited with introducing a variety of musical influences to the Italian pop scene. She was among the first to utilize reggae (with "E la Luna Busso") and rap (on an early single, "Movie"). Bertè came from a musically inclined family, with a similarly successful sister, the vocalist Mia Martini. Working as a nude model up until that time, Bertè made her recording debut in 1974 with Streaking. It was her follow-up a year later, entitled Normale o Super, that made her famous with the single "Sei Bellissima." Recording regularly throughout the late '70s and early '80s to only moderately positive feedback prompted the singer to leave her longtime producer, Mario Lavezzi, and forge a new path with producer Ivano Fossati. It was with Fossati that Bertè recorded what is considered her strongest work to date, Traslocando (1982), featuring the signature tune, "Non Sono una Signora." After a number of successful works (Jazz in 1983, Savoir Faire in 1984, and Carioca in 1985), Bertè married athlete Björn Borg in 1988. The following years were an artistically active period, filled with a number of successful albums and appearances at the famous Festival di Sanremo, but Bertè's marriage to Borg was tumultuous, and ended in 1995. The suicide of her sister followed just two years later, causing Bertè to retreat from public pursuits for a time. Bertè's next large foray into public life was her participation on the reality TV show MusicFarm in 2004. That appearance won her back the public support she would need for her 2005 release, Babybertè, which debuted at number two on national charts, and was her strongest release yet. ~ Evan C. Gutierrez, Rovi