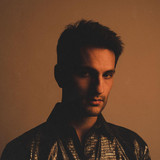 Artist and producer STRØM makes avant garde pop moving in an electronic underground world. When the multi-instrumentalist released his first single in 2017, it spread quickly and shortly thereafter it became the soundtrack to a BMW commercial and entered first place on HypeMachine. According to STRØM himself, the ambition is to form a type of hybrid genre without rules or fixed directions. His music has also been featured on several series on Netflix and FOX. In 2020 he released his debut album Immortal, which is best described as experimental lo-fi pop, taken straight from London's underground scene.