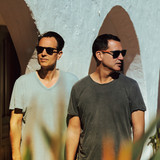 Blank & Jones have been hugely important in the history of electronic music. They started in 1997 with their debut „Sunrise" and were one of the main originators of trance music with artists like Tiesto and Paul Oakenfold. During their carreer they never knew any musical boundaries and worked with famous pop stars like Robert Smith (The Cure), Bernard Sumner (New Order), Sarah Mc Lachlan, Pet Shop Boys, Boy George, Deep Forest and Keane to name just a few. Their sound evolved with the years and so did their worldwide success. To date they released 20 artist albums, which all charted in the sales charts and cover such various styles like Electronica, Ambient, Lounge, Pop, Trance, Jazz, Modern Classical and Dance Music. Their great variety is also proved by the highly acclaimed compilations like "so8os [so eighties]" which pay tribute to the original club mixes of the 80s, or "Milchbar" and "Chilltronica" where they bring the listener new soundscapes of downbeat music.