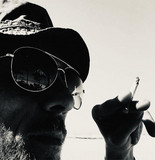 Another in a long line of house maestros to come out of France during the 1990s, Benjamin Diamond -- known as Benjamin Cohen in real life -- started his music career as a punk rocker. One of his first projects was the punk band Chicken Pops. But, inspired by such acts as New Order, Michael Jackson, and Roxy Music, he quickly gravitated towards electro-funk and hooked up with the band the Party. Though fairly popular in France, the venture was completely overshadowed by his next major project, Stardust, launched in cahoots with celebrated disco house personalities Alan Braxe and Thomas Bangalter (of Daft Punk). Diamond sang the lyrics on Stardust's 1998 single "Music Sounds Better With You," which was a major hit the world over. In 2001, he released his first album, Strange Attitude, which carried his earlier singles "Joyride" and "Strange Attitude." That same year, he put out the EP Solitaire; carrying tracks he recorded especially for the Dior spring-summer fashion parade. ~ David Peter Wesolowski, Rovi