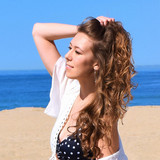 Keira Moran kickstarted her singer/songwriter career at a 3rd grade piano concert in a music store, where she debuted her timeless hits ‘Halloween’ and ‘Chicken Burrito’. Despite rave reviews from Keira’s parents and grandparents alike, she claims her songwriting talent has developed in leaps and bounds since then. Born and raised outside of Washington D.C. in Alexandria, VA, Keira studied at the Frost School of Music. Whilst enrolled, she was an apprentice of Graham Edwards (Grammy-nominated songwriter of 'The Matrix' team, who have written and produced for Rihanna, Britney Spears and Christina Aguilera). Graham truly solidified her passion for “the business”, and from then, she knew exactly what she wanted to do. In June 2011, Keira won the International Smashtune Songwriting Contest for her song 'When I'm With You'. The grand prize was a trip to the Kauai Music Festival where she met her first songwriting role models, Jason Blume and Ralph Murphy. In August 2012, Keira wrote the score for the short film "American Financial" which won multiple industry awards. Keira boasts the perfect versatile pop voice - capable of belting an EDM banger or slowing down for a soulful slow number. An electro-pop fan at heart, Keira injects each song with her fun-loving personality and lively lyrical style. Keira moved to Los Angeles after graduation in August 2017. She currently writes songs for artists and producers around the world, and hopes to one day grow up to be Ryan Tedder.