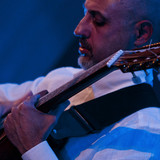 Guitarist, composer, singer, performer and sound artist born in Buenos Aires of Italian origin. His musical interests range mainly from contemporary classical music and new technologies, to popular music from Argentina and Brazil, creating a dialogue between these cultural worlds. His music has been performed by important performers, used in video, television and cinema in more than forty countries in the world and he has played with some of the most important musicians on the international scene, such as Riccardo Chailly, Luis Bacalov, Vinko Globokar, Nicola Piovani, Vladimir Jurowski, Diego Flores, Yutaka Sado, Pete Huttlinger, Toninho Horta, Jorge López Ruiz, among others. He is the guest of several recording and editorial projects with Decca, Stradivarius, Warner Chappell. The scores of his works for guitar are published by the Canadian publishing house Les productions D’OZ and in Italy by Sinfonica Jazz. From 1996 to 2012 he was guitarist of the Giuseppe Verdi Symphony Orchestra of Milan. He is currently artistic director of the "Menaggio International Guitar Festival" didactic director of the "Donald Swann Music Academy" and teaches at the "Conservatorio della Svizzera Italiana".