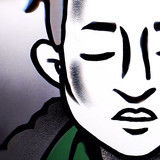 "Moving from the confines of traditional dub into an open expanse of borderless beats, Alpha Steppa is paving the way for a generation who are keen to tread new waters. If experimentation is the lifeblood of dub, Alpha Steppa has a unique cell count." DJ Mag 2021 Alpha Steppa (Steppas Records / Dub Dynasty) has been surrounded by sound system culture from a young age. As the son and nephew of respected UK dub pioneers Alpha & Omega (Greensleeves) his dubbed out style draws upon the sounds of his musical heritage, filtered through an exploration of reggae, dub, hip hop, lo-fi, sound design, traditional and electronic music. Alpha Steppa has toured the world, produced numerous critically acclaimed albums and most notably developed a dynamic community around his unique sound and conscious message. “One of the most prolific and inventive dub producers around” WIRE Alpha Steppa’s Steppas Records, established in 2010, is an influential and independent record label, specialising in modern sound system music with a deep roots foundation. Working with new artists as well as some of the most established in the scene the Steppas Records mission is to bring powerful, conscious and uplifting music to the world. Steppas Records also plants a tree for every record made 🌱 Learn more at www.steppas.com “A serious player in the sound system world!” MIXMAG “Obliteratingly Heavy Bass” Q MAGAZINE “Album of The Month” MIXMAG (ASLP001 & ASLP002) “Dub to worship” REGGAE ROOTS REVIEW