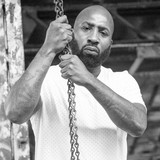 St. Clair Bear, born Sergio M. Davis, (best known) as “Bear”, was raised on the East side of St.Clair in Cleveland, Ohio.

At an early age he developed a passion for various genres of music in the 80’s era. Young Bear was only 8 years old when he began to express his life through poetry. Years would go by, The lifestyle of crime and drugs would later land Bear in prison. The same place where he would reunite with his passion "Music".