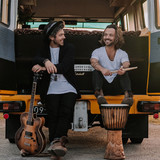 The band Cookhouse is formed by the two brothers Ronald (vocals and guitar) and Jeroen Hendriksen (drums). From the moment their debut single 'In Another Life', a modern country pop classic with international allure, appeared, the brothers did not have a day of rest. In no time, the single reached half a million streams on Spotify and ensured a crowded agenda. Follow-up singles 'Made It Fly' and 'Old Friend', also proved to be beautifully produced streaming cannons.   Their second E.P. 'Fool's Paradise' (May 10th, 2019) has a different Cookhouse sound. With big anthems & more rock influences than their first E.P. (LOVE / LUST).   At this moment they’re releasing their third EP called “Live Sessions”. This album is full of live recordings of earlier songs with a new approach. They will be releasing one song a month. So make sure to check this out and add these songs to your favourite playlist as well.   Find Cookhouse on: https://www.cookhousemusic.com https://www.facebook.com/cookhousemusic https://www.instagram.com/cookhousemusic https://www.youtube.com/cookhousemusic https://www.soundcloud.com/cookhouse-music