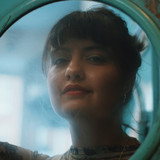 Leonie Prater is a 25 year old Singer Songwriter, Indie-Folk artist based in Marshwood, Dorset (UK). She was born in Dorchester (UK) and raised in St.Gallen (CH). Her debut album Metamorphosis was released on March 12th 2021. It is her first big project and includes songs both based on personal stories or everyday situations. It is a very personal piece of art which tells stories about 'change', 'finding a home' or 'suicide and depression'. Her album is available both on Vinyl and digital. Leonie will launch her album at the Marine Theater in Lyme Regis on August 26. 2021. Throughout her career Leonie collaborated with different people. She released a version of her song The River together with Manuel Gasser which includes some dreamy vocals and chilled out electric guitar lines. Leonie also had the pleasure to collaborate with Biggabush who produced a remix of her song 'The River' which was released recently on June 11 2021. She is currently working on her second album which she is planning on releasing in 2022. Expect some new tunes with lots of different genres influences. Leonie's biggest influences are Ben Howard, Alice Phoebe Lou, Ásgeir, Phoebe Bridgers and Sufjan Stevens