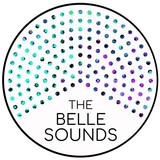 Based in Austin, TX,

The Belle Sounds have made a name for themselves as seductive alt-pop aficionados, creating lush soundscapes intertwined with effervescent harmonies and beautiful lyricism. They stand out in their own unique sonic space but are influenced by everything from 80s greats Kate Bush, Peter Gabriel and Depeche Mode to modern bands like Spoon, Cannons, Alvvays and Hatchie. Throughout the seven years they have called themselves The Belle Sounds, the band has undergone different iterations with various musicians sitting in, recording and performing, but the core of The Belle Sounds has always been lead frontwoman/guitarist/keyboardist Noëlle Hampton and her husband, musical counterpart and electric guitarist André Moran.  They are releasing a new single every month in 2020. Follow them to keep up with all of the new music. Their previous albums/EPs include “The Sea Within” (2018), "Black Stone EP (2014) and their eponymous "The Belle Sounds" (2013). They were named one of Austin’s “Best New Bands” by the Austin  Chronicle Music Poll & The City of Austin proclaimed April 13, 2017 to officially be “The Belle Sounds Day.” They have performed at ACL Moody Theater, 3Ten ACL Live, One-2-One Bar, The Saxon Pub, Cheer Up Charlie’s and more. They recently had their song, "Safe From Love" (Instrumental version) placed in the Netflix hit show, OUTER BANKS.