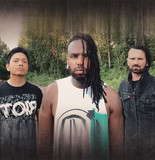 The Veer Union is a Vancouver based Hard Rock band that formed in 2004 and released their first independent album titled “Time To Break The Spell” in 2006. The band quickly gained notoriety after winning a spot in the CFOX 99.3 Vancouver Seeds radio competition in 2006. In 2008 The Veer Union landed a record deal with Universal Records USA where they achieved a Top 10 Active Rock Radio Single with their critically acclaimed song “Seasons” in the USA and CANADA, since then The Veer Union has collectively sold over 150,000 Albums and also reached over 50 Million Streams Worldwide and had 11 TOP 40 Singles on the Billboard Rock Radio Charts.The band's last album (2018) "Decade II" (produced by the bands lead vocalist, Crispin Earl) contained 4 "Billboard Chart Top 40" single's and has been streamed over 17 million times on Spotify alone. The most notable track off the album, "Living Not Alive" reached #21 on the "Billboard Charts Top 40" in the United States, amassing over 8 million streams, received over 1.3 million Views on YouTube and the album its self has sold over 10,000 units. The band is releasing "Covers Collection Vol.1" (Deluxe Edition) on June 12, 2020 with their version Halsey's, "Nightmare" which has already reached over 4 million views climbed to #25 on "The Billboard Rock Charts" The band remains actively writing and recording