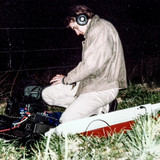 Fascinated by a mood that is neither music or sound design, my work explores the amalgamate in which both could exist at once. I strive to present neither a time nor a place specifically and am conscious of avoiding memory sounds with strong build-in associations. Just the same mixing conscious and subconscious listening does hold an enchantment when blending field recordings and rhythmic or tonal elements. My recordings are a guide, presenting the outlines of a windswept landscape and leaving the details within to the imagination. As a musician, producer and audio designer I've worked on 15 albums, collaborated with artists Joris de Man, Stan Linders and Tatiana Brainerd and have created music for The Economist Original Documentaries and independent film makers Bryan Woods, Scott Beck and David Alexander. Recordings in the late 90's were released under the pseudonym of Liquid Morphine. In collaboration with Darren Scott’s H/S Recordings label, I released my first Compact Disc, GrijsGebied in 2001 followed by Three, Niemandsland and Maalbeek which was the last physical release.As a game audio designer my contributions are on found on the game soundtracks of Tearaway, The Chronicles of Spellborn, Elite Dangerous, Planet Coaster, Planet Zoo and Jurassic World Evolution.