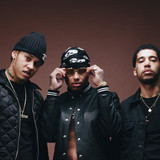 Toronto’s Prime Boys are no strangers to putting on for their city. Together the trio has made an impact on the hip hop scene -both locally and globally, by consistently releasing projects that speak directly to the urban culture that they are apart of.   In the 3 years since they began releasing music to the public, the Prime Boys have made waves in both the local and global music scenes. As a collective, Jimmy Prime, Donnie, and Jay Whiss have been gaining momentum with individual projects as well a posse cuts that celebrate the creativity being fostered in Toronto. From contributing to to the culture of the rap game and Toronto, to co-signs from some of music’s most powerful voices, Jimmy, Donnie, and Jay Whiss have amassed a sizable following of hip hop fans who anxiously await each release.   With millions of views on their music videos and millions of streams on their music collectively , it doesn’t look like the Prime Boys will be slowing down anytime soon. A string of live performances and high-profile collaborations secured for the coming year are sure to propel the Prime Boys to the all star status that they’ve been working hard to achieve.