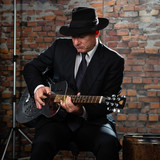 The musician, composer, producer, author and entrepreneur was born in 1956 in Rielasingen (Southern Germany). After early musical education in the village music of his birthplace, Norbert started to play the slide guitar when he was only aged 12. In 1979, he founded the City Blues Connection in Hamburg and became a professional musician in 1980. His second album „Bluesin’n’Boogin’“, which was published the same year, received significant attention and appreciation in the German Blues scene – explicitly also due to his slide guitar.

In 1984 he released his third LP „I Do Not Play No Rock’n’Roll“, which was far ahead of its time in respect of sound and arrangements in the Blues genre and manifested the distinctive sound which he had already developed. In the following year „World On Fire“, the album recorded with Louisiana Red, appeared, later reissued in 2017 in a remastered version. In 2015 Norbert began