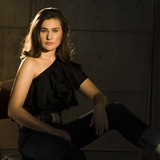 "She Better Get Out" is Sienna Morgan's most recent release and was recognized by Nashville Songwriters Association International putting Sienna on the "Ones to Watch" list for the third time in her brief career.

Sienna Morgan hit the music scene in 2015 at age 13 (first album "The Hard Way" resonates with tweens; her second album "What I Want" recorded at age 15 has an eclectic, universal appeal). Other recent singles in 2018 include "Revenge" and "Dumb Boy."Here's what some fans have to say:-This young singer has a lot to offer, with a powerful country girl voice that is very lovable-Even if you aren't a fan of country, she will still make you want to sing along-Her songs remind you of all the reasons you loved the teenage years.For more info see www.SiennaMorganMusic.com