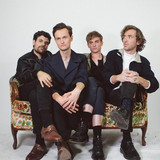 Montreal quartet Ought began in 2011, taking heavy cues from their city's thriving scene of underground politics, loft parties, and D.I.Y. culture. Formed by singer/guitarist Tim Darcy (known as Tim Beeler until taking his mother's maiden name in 2015), bassist Ben Stidworthy, keyboardist Matt May, and drummer/violinist Tim Keen, the band melded unlikely influences from both high-energy mid-'90s emo bands and airy, early college rock acts like the Feelies and Talking Heads. The bandmembers all lived together in a shared apartment/practice space, self-recording their first EP, New Calm, in 2012. They played frequently in Montreal, eventually catching the ear of indie label Constellation, which released their debut full-length album, More Than Any Other Day, in the spring of 2014. They returned with a four-track EP, Once More with Feeling, released in October of the same year. The group's second album, Sun Coming Down, appeared in September of 2015. Darcy released a solo album of more personal material in early 2017, with some of the songs pre-dating Ought. The band returned in 2018 with a new label and a new record. Room Inside the World was released by Merge Records, and was preceded by the single "These 3 Things," which included drum machines and synths that hinted at a development in their sound. ~ Fred Thomas, Rovi