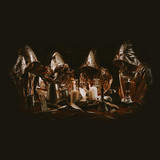 PHOXJAW - Bristol, UK. Signing to Hassle Records (Brutus, Pagan, Press Club) continues the alternative quartet's rise, following the acclaim of their debut EP Goodbye Dinosaur..., tours with Black Peaks and Pagan, and appearances at 2000trees and Camden Rocks festivals. The Bristol-based rock outfit made waves in 2018, garnering support from Kerrang!, Metal Hammer and the Radio 1 Rock Show surrounding the release of Goodbye Dinosaur... The success of the debut EP was unsurprising given the reaction to PHOXJAW's first ever release, their double A-side single Spin Club/Victorian Dolls (Pale Wizard Recordings) which sold out quickly. With their follow-up single 'Triceratops' and subsequent EP the band has received praise from a wide range of UK press: Kerrang! ("unhinged and mesmerising"), Metal Hammer ("inhabiting their own, unique musical world"), Rhythm Magazine ("already causing waves") and more. There are few bands that sound as unique, infectious, or as powerful as PHOXJAW. Although hard to pigeonhole, the band are at times reminiscent of early Biffy Clyro, At The Drive-In and Cave In. The four-piece owe much to their melodic tenacity and driving, off-kilter riffs and mixed with their ferocious energy onstage and compelling personalities, PHOXJAW are firmly establishing themselves as a force to be reckoned with.