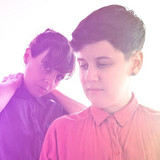 CATBEAR is Zoe (she/her) and Sarah (she/her), two best buds who like hanging out making nostalgic electronic alt pop music, wishing they were living in the future where everyone rides a fluorescent hoverboard and neon spokey dokeys are still cool. Always fiercely independent, CATBEAR began life in the 2010s as indie post-punk grrl trio Cat Bear Tree, sharing the stages with Nova Twins, Skinny Girl Diet and The Tuts as they blazed a trail through the London live scene. Their captivating three-part harmonies juxtaposed with shouty gang vocals sat atop fuzzy guitars. They loved being part of the DIY music community and released 2 EPs as a trio. During some time apart Zoe had been starting to produce her own solo releases and when Sarah and Zoe got back together as a duo, a new 80s-influenced sound emerged and CATBEAR was born. “An astounding new single even CHVRCHES would be proud to call their own” - It’s All Indie “CATBEAR are the hottest new indie grrrl band” - DIVA Magazine “Absolute new band crush” - Loud Women