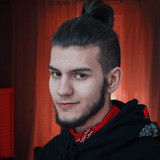 bWy is a fresh artist from germany making both german and english music, oftentimes blending them together like it's the same language. When asked about why he is rapping in english and not just german he said: "You know when i made my first song ever, i didn't even think about it - it just came out in english. I always do just what i feel like doing with music but beyond that I also feel like my message is for the world, so I like to keep it tangible." bWy (pronounced: 'bi waɪ') doesn't shy away from speaking his mind. The self-announced "FIRE PRINCE"

is making his intentions clear in his mostly self-produced songs: lifting peoples spirit & raising awareness in order to create a better future. "I'm just trying to make a difference with my music, whether I succeed or not - I know I gave it everything I got and that's all that matters to me" The young creative has been putting out countless ambitious songs and projects over the last couple of years, proving time and time again that his work ethic is unmatched. Always surprising listeners with new directions and styles, bWy is one of the most unique & versatile artists in the game right now and it's only a matter of time for him to get the recognition he deserves.