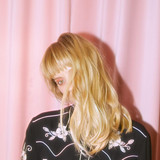 Emma Elisabeth is a Swedish singer/songwriter and producer based in Berlin. Her debut full-length album ”Melancholic Milkshake” (produced by Emma Elisabeth herself) was released In 2019 (ferryhouse). It received praise from media like Rolling Stone Magazine, caught the attention of international blogs like The Line Of Best Fit and Earmilk and got airplay on College and Independent Radio in USA, Sweden & Germany. Her love for classic songwriting leans towards a sound inspired by 70's/80's pop, alternative country/rock with post punk influences, following in the tracks of artists like Stevie Nicks and Mazzy Star, inspired by legends like Patti Smith and Dolly Parton. In 2018 and 2019 she was a showcasing artist at SXSW and has supported bands like Sunflower Bean and Mini Mansions. Among her collaborators are colleagues like Victor van Vugt (Nick Cave, PJ Harvey), Earl Harvin (AIR), Nick McCarthy (Franz Ferdinand) and Alberta Cross. During 2020 her intimate cover of Velvet Underground's "I'll Be Your Mirror" was picked up for an international advertisement campaign for DELL computers, and her songs have been synched in movies like “High Society” and “9 Days Awake”. "Diverse and clever Post-Rock-Pop" – Rolling Stone „Her songs match her emotional openness with immaculate songwriting” – The Line of Best Fit "Unfurling with a gentle jangle, the crisp, spring-fresh songwriting can't fail to get under your skin” - Clash Magazine.