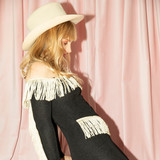 "Her dramatic songs manage to sound heroic and broken all at once, exploring the deepest of emotions most of us tuck away or spend our lives running from. Lovers, her latest indie-pop gem, showcases a vocal performance so huge it could blow a house down."

- Happy Mag Emma Elisabeth is a Swedish singer/songwriter and producer based in Berlin. Her debut full-length album ”Melancholic Milkshake” (produced by Emma Elisabeth herself) was released In 2019. It received praise from media like Rolling Stone Magazine, caught the attention of international blogs like The Line Of Best Fit and Earmilk and got airplay on College and Independent Radio in USA, Sweden & Germany. Beautifully handcrafted songs inspired by 70's/80's pop, alternative country/rock and post punk influences, inspired by legends like Patti Smith and Dolly Parton. In 2018 and 2019 she was a showcasing artist at SXSW. During 2020 her intimate cover of Velvet Underground's "I'll Be Your Mirror" was picked up for an international advertisement campaign for DELL computers. In 2021, her latest dreamy offerings hint towards an upcoming album, due in 2022 on Clouds Hill, that'll be every bit as epic as it is intimate. "Diverse and clever Post-Rock-Pop" – Rolling Stone „Her songs match her emotional openness with immaculate songwriting” – The Line of Best Fit "Unfurling with a gentle jangle, the crisp, spring-fresh songwriting can't fail to get under your skin” - Clash Magazine.