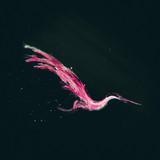 Innovative and unconventional; Neon Gru are an emerging six-piece alt-pop band with a diverse array of influences and experience. From jazz and afrobeat to flamenco and folk – they fuse eclectic offbeat rhythms with smooth melodies and rich, progressive electronic productions – resulting in a sound that defies genre boundaries. The band (Ny Oh, Leon Itzler, Ru Lemer, Nuno Brito, David Dyson and George Risk) was born from UK music festivals, where, as strangers, they played together for years in jam tents across the country. They eventually took the jam back to the studio, emerging from a week's recording session with their debut EP “I Am A Bird”, due this winter. Neon Gru released their debut single Growing Pains in the last few days of 2019, which reached over 10,000 streams in its first week and introduced them as an experimental and electrifying new addition to London's underground music scene. Their sound is impossible to pigeonhole, fusing together a flurry of different styles to create something distinctly theirs. Inspired by artists such as Hiatus Kaiyote, ALASKALASKA and Moses Sumney, their jazz-infused alt-pop anthems give off an aura of enchanting mystery — blending unorthodox rhythms with ethereal soundscapes. Though a relatively young band, the members are no strangers to the music industry, and have individually worked with artists like Harry Styles, Dalton Harris, Natalie Merchant, Gregory Porter and Nile Rodgers, just to name a few.