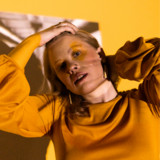 Sarah Jane is a prolific Alt-Rock, Indie singer, songwriter from Sydney, Australia who has amassed a huge online following. The singles for the videos ‘Lately’ and ‘Apparently’ from the upcoming ‘Moth’ EP are close to hitting 50,000 video views between them. With over 295,000 subscribers and over 30 million views on YouTube it would be accurate to call the young musician a viral sensation. The six-track ‘Moth’ EP arrives on Vinyl and Streaming Friday May 28th. The new EP follows two solo albums “Absence’, an acoustic album released in 2019, and the album ‘Tainted Timeline” released late in 2020. Sarah Jane has released two full-length records with her band ‘The Violet Stones’ over the same period.