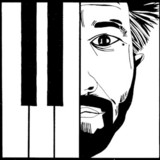 Mike Roelofs is a versatile musician, entangled in the continuous exploration of his own authenticity. Instead of pigeonholing, he rather embraces the unknown. His style can be defined as inventive, with a touch of avant-garde and depending on the circumstances, he is eager to explore unconventional ways of playing to tell his story. Alongside the piano, Mike often includes other instruments such as percussion or voice. Sound, atmosphere and improvisation serve as threefold guidance, making his music personal and intimate. Roelofs received several awards including the Dutch Jazz Competition prize for best composition in 2008 during the North Sea Jazz Festival and the Anne MG Schmidt award for best Dutch theatre song in 2013. As a pianist, Mike is active all over Europe, and beyond.