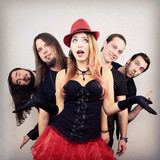 The Scarlet joined to the growing folk rock wave of Hungary in 2013, and with their irish and pirate punk music with a wee bit of metal, shortly made them one of the scene's significant bands. Having gigs on the Irish Stage of the Sziget Festival three times in a row made them realize that this music would fit to both the Hungarian and the foreign crowds too. Their first EP 'Midnight Avenue' was released in January 2015 which was followed by their first own tour in Hungary. During the years the style of the band have became a bit more aggressive and heavier than similar bands, which led to the release of their first LP 'Hardfolk Shanties' in January 2017. The band now tours more and more in Europe, while releasing the first two singles "Start With A Shot' and "Sail Eternally" from their upcoming second LP. “'Hardfolk Shanties' is an amazing pirate album. From the very first track 'Heroes of Our Future', The Scarlet deliver a pirate metal CD based on electric guitar and angrier vocals. As usual Julia’s flute and Dominika’s fiddle are spotless. (...) The Scarlet are evolving as a band and their latest offering is the proof that they are following the right path. A rad album." - Kinksmarkham, Celtic Folk Punk Blog