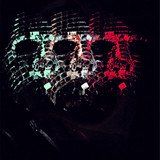 "While they may have been formed in the city of Little Rock, at first listen you will be convinced that Illusionaut hails from the depths of space. Illusionaut has been described as post-punk space rock with progressive tendencies. According to Tunedloud Magazine, “Illusionaut is so immersed in all the elements of space-rock and psychedelia, and have integrated it so well into their music and character, that it makes the music on “Snow Queen” practically sound timeless. It is the essence of creative rock in all its shapes or forms.” Through years of evolving and exploration they have developed into a prominent group of songwriters and performers with their own multifaceted signature sound."