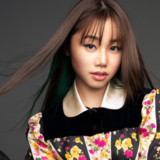 RIRI Born in 1999, 21 years old, Z generation’s artist. As soon as she started her music career at the age of 16, she was No. 1 on the iTunes R&B chart in Japan, and she was the youngest performer at one of Japan's largest festivals, Summer Sonic, and has been performing there every year since. She became the youngest Japanese artist to perform at SXSW and wowed the local audience.  In 2018 “That's My Baby" was chosen as a "number in heavy rotation" on 46 stations across Japan and ranked number one on the radio's HOT 100.  In the same year, she released her second album "NEO". On this album, she also collaborated with Saweetie.  Also, 'HONEY' became a popular song as it was used as the end song for a popular talk show. In 2019, RIRI was featured in the commercial song that Japanese major company "Shiseido" is putting a lot of effort into, and the song's voice resonated all over Japan and Asia.  RIRI was also the official Japanese artist for the Disney movie "Lion King"and she sang the official theme song "Circle of Life". She also represented Japan at the world premiere in Los Angeles, where she participated in the interview with director Jon Favreau and Childish Gambino. In 2020, RIRI was in charge with dubbing the Japanese ver of Bombarlina in the 2020 film "CAT's", which was dubbed by Taylor Swift for original. She was selected for"Forbes 30 under 30 Asia 2020” . RIRI is the first Japanese artist to be selected for this award.