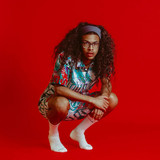 LTtheMonk is a hip-hop artist originally from London, England, currently residing and performing in and around the Toronto and Hamilton areas of Ontario, Canada. He describes himself as London made, East-Coast trained to pay homage to his home city, as well as the New York MCs who were his inspiration to start rapping at a young age.   LTtheMonk's new album ‘On The Wall’, his first to be released under the Sonic Unyon Records label, is available now!   Mange Tout.