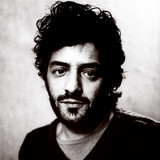 Algerian singer/songwriter Rachid Taha became an iconic revolutionary figure in his adopted French homeland due to his eclectic blend of native rai and chaabi influences, raw punk energy, and rebellious rock & roll attitude. Born in Sig, Mascara Province in Algeria in 1958, Taha emigrated to France with his family at the age of ten. While working in a heating factory in the '70s, he founded his own nightclub, Les Refoules, which played mash-ups of Arabic pop hits over tracks by the likes of Led Zeppelin and Kraftwerk. In 1980, he formed Maghreb punk outfit Carte de Sejour, who recorded two albums, Rhorhomanie and Ramsa, and scored a hit with an anarchic cover version of Charles Trénet's Douce France, before disbanding in 1989. Two years later, he launched his solo career with debut LP, Barbes, but achieved his biggest success with 1998's traditional Algerian/Arab-inspired Diwan and 2004's Tekitoi, both of which were produced by long-term collaborator Steve Hillier. Taha has also performed with Robert Plant, Patti Smith, and Brian Eno, appeared on-stage with Damon Albarn's side project Africa Express, and covered the Clash's "Rock the Casbah" for the Joe Strummer film, The Future Is Unwritten, while several of his songs have been featured in Hollywood movies including Black Hawk Down and The Truth About Charlie. ~ Jon O'Brien, Rovi