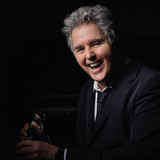 Singer, producer, and composer Steve Tyrell is a soulful, throaty crooner with a deep love of the American pop and standards tradition. Born and raised in Texas, Tyrell cut his teeth in local R&B bands in the Houston area before relocating to New York at age 18 and landing a staff position at Scepter Records. As the label's head of A&R and promotion, Tyrell championed the classic Burt Bacharach/Hal David-composed recordings of Dionne Warwick and also recruited singer B.J. Thomas, producing his hits "Hooked on a Feeling" and "Raindrops Keep Fallin' on My Head." In the years to follow, Tyrell additionally made his mark as a hit songwriter, co-writing the gold-selling number one hit "How Do You Talk to an Angel" for the Heights and the Jamie Walters smash "Hold On," as well as working on music for film (Mystic Pizza, Midnight Crossing, and The Brady Bunch Movie, among others) and television. He returned to performing in 1991, singing "The Way You Look Tonight" on the soundtrack to Father of the Bride, then had two more cuts on the soundtrack to Father of the Bride, Pt. 2 in 1995. An album of standards, A New Standard, followed in 1999; it was a Top Five hit on the jazz charts and was still listed in those charts two years after its release. Tyrell followed it with a second album, Standard Time, in 2001. The holiday-themed This Time of the Year arrived in 2002, followed in 2003 by another album of pop standards, This Guy's in Love. Around this time, Tyrell began an ongoing residency at New York's famed Café Carlyle, a perfect venue for his continued exploration of the Great American Songbook. In 2005, he paid homage to one of his idols with Songs of Sinatra on the Hollywood label; it was followed a year later by The Disney Standards. Tyrell's seventh album, Back to Bacharach, was released in 2008 and showcased his love of pianist/composer Burt Bacharach's many songs. He returned in 2012 with yet another homage to the Great American Songbook, I'll Take Romance, on Concord. A year later he delivered It's Magic: The Songs of Sammy Cahn. Arriving in 2015, That Lovin' Feeling featured his take on classic pop songs from the Brill Building era of the '60s. Tyrell then marked his 13th year performing at the Café Carlyle with 2018's A Song for You, a set of romantic favorites by Fats Waller, Leon Russell, Van Morrison, and others. ~ Jason Ankeny & Al Campbell, Rovi