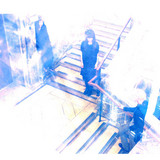 RiLF is the alternative rock band formed by Calu who is the vocalist of Matryoshka, an electronica unit featuring a mysterious sound, and Takahiro Kido and Yuki Murata, who are the members of Anoice, an instrumental music band featuring dark cinematic sound. After releasing the debut EP 'era.ep' to coincide with their first live show in April 2010, RiLF released their debut album, 'Ferris Wheel, in September of the same year, featuring lovely vocals, simple band sounds and a beautiful string orchestra. Since then, they have participated in tours with various international artists such as Dakota Suite from UK, SayCet from France, and Stina from Australia. In 2018, RiLF released their second EP 'Three Stories for Numbers’, featuring magnificently violent guitar noise like Sigur Rós and My Bloody Valentine, and in September 2020 the third EP 'Miss You’, was released on handmade flexi disc (four colours / including digital data) for the first time. In October of the same year, RiLF released their second album, and first album in a decade, 'My Beloved Farewell’. It’s a masterpiece of alternative rock and post-rock featuring RiLF's uniqueness; a magnificent orchestral sound woven with strings such as violins and violas, a simple but solid band sound and Calu's gentle vocal melodies.