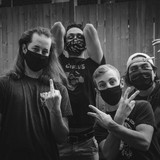 UNIFY / AMPLIFY / DEFY Happy to carry the load, Southern Ontario's politically charged Under Stolen Skies tackles modern frustration with a free prose over smooth grooves & hard edge. The four piece, hailing from Kitchener, Ontario, brings together a film director, a hip hop producer, a poet, and a prodigious composer in a unified expression of rebellion. Sounds ranging from ambient synth, to prog-metal riffs and breakdowns, the four have created an evolving soundscape, fearlessly open ended, in their pursuit of bold messaging. Their most recent single, recorded at School House Studios with Nick Ginn, titled Kill Corrupt was inspired by the struggles of The Wet’suwet’en People in their stand against illegal occupation of their land. This entry, along with the preceding State Of I, are entries for the band's debut EP, which they look forward to release in 2021 (delayed due to COVID).