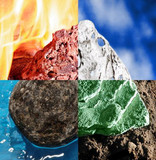 Dreams?   Let me tell you about dreams. But I warn you it is not granted that the dream matches the dreamer. Dreams can also be explained in a way that is opposite to what they seem. So they are infallible, since you can deduce the pro’s as well as the contra’s from them.   Some say dreams that occur just before sunrise refer to the future; those who follow on sunset refer to the past. Dreams are safer in summer and winter than during spring or fall – and more at sunrise than at any other hour of the day. Some others say there is a stone in Batriana named Eumetris, which – if it lies underneath your head while dreaming – turns dreams into solid, sound prophecies.   (From the book Imprimatur by Monaldi & Sorti)