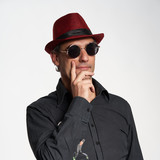 André is a person of many faces. He is an artist, singer, composer, songwriter, producer, poet and multi-instrumentalist that plays guitars, bass, piano, percussion, sax and drums. André’s interest in music begun at an early age when he studied piano. Later on he found the guitar and studied classical and electric guitar for several years. Singing was also of great interest where he learned different vocal techniques over the years. Apart from singing and playing instruments, songwriting and music production is other of Andre’s interests. His voice is quite distinct, strong and peculiar, possessing a wide vocal register that spans over six octaves. He currently resides in London, UK and he is a prolific singer, songwriter, composer and producer mixing pop with funk, indie, electronic and even rock music, André is also part of a project called MEL MEL is a project with singer Melanie Spencer involving pop and soul music where Andre is more involved with songwriting and music production. They have released two CDs MEL has released two CDs “Give It To Me” and “New Soul”