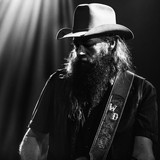 Sitting on the porch of his house in the foothills of the Smokies, Ward Davis exchanges a few friendly words with a neighbor and lights another cigarette. “When you put a record out, it’s a forever thing,” says Davis, breathing deeply. “Whether they mean something to me now or meant something to me then, these songs are part of my life.” Davis’s much-anticipated third album, Black Cats and Crows, is finally finished. It is a triumph: a muscly country-rock record filled with murderous story songs, heartbreaking vulnerability, and that unmistakable voice––Davis’s weathered croon, a gift, barrel-aged then left out in the sun.