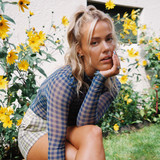 Julie Bergan has already amassed over 1,5 billion streams from a catalogue including two domestic #1 singles and her 2x Platinum debut album Turn On The Lights. Along the way, she’s earned prestigious awards including "Song of the Year" at the NRJ Awards, "Breakthrough Artist of the Year" from the Norwegian songwriters’ association (NOPA) and multiple Norwegian Grammy (Spellemann) nominations for her singles STFU and “Ignite” with Alan Walker and K-391.   As a daughter of two music teachers, nature and nurture combined made her who she is today. Surrounded by musical instruments, the Bergan family sang together wherever they went. Julie’s love of music is amplified by Britney Spears, the Backstreet Boys and The Beatles as well as the artists who first inspired her to sing – Rihanna, Beyoncé and Kehlani.   In January 2020 she released her collaboration with Seeb «Kiss Somebody», kickstarting the new year into gear and throughout the spring she has featured on several singles; «Outline» with Crazy Cousinz,«Get To Know Me First» with Molly Hammar and AWA and «Don’t You Wanna Play?» with Seeb. This autumn she is set to release her new EP ‘HARD FEELINGS: Ventricle 2’ including her brand new single «One Touch».