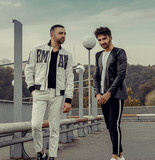 AKORD officially started as a band on December 4, 2006, on the stage of the National Palace in Chisinau, during the show "Potcoava de Aur", organized by Radio Noroc, with the song "Maria". After their debut, the band members composed the first songs: «Unde-i Dragostea» and «În ochii mei», making the first video for the song «În ochii mei».   From 2009 to the present, members of the band AKORD are the artists of the production house CML Fabrica de Hituri, where, together with the music producer and lyricist Iurie Badicu they create and released several songs: Mă doare, Când te visam, Satele Moldovei mele, Cine s-a născut aici, Hora Dorului, Strada zilelor senine, Unde Unde, Wo Wo, as well as other songs that become indisputable hits that bring popularity to the band, ranking on the leading positions of the tops: Muz TV, KISS FM, HIT FM , Noroc TV, and Radio Noroc, TV Moldova-1 and Radio Moldova, Radio Aquarelle FM, Euro Airplay TOP 200 (EU) and others.   The video for the song «Mă doare» becomes the most-watched video of 2010 in the Republic of Moldova, being also the most broadcast song on the radio.   In the following years, AKORD became the most popular pop band on local music stations thanks to its extensive repertoire of their own songs. Listen: Strada Zilelor Senine Listen: Unde, Unde