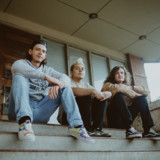 54 Reasons is a pop punk act from Houston, TX. The project started out in October 2013, and released their debut album, “Just A School Thing,” a little over two years later, followed by their debut EP, “3 Hour Shower,” which dropped in early 2018. With influences ranging from All Time Low, Blink 182 and Good Charlotte to Green Day, NOFX and Sum 41, 54 Reasons has crafted a sound that blends the melodic elements of modern pop rock with more energetic, punk-leaning instrumentation to create fun and upbeat pop punk music reminiscent of the early days of the genre. After the departure of two band members, vocalist/guitarist Juan Alvarez continued the project on his own, writing and recording the project’s EP, which is titled “Your Mom’s Favorite Band” and released in October 2018. Later Evan Plyler and Aron Hetsko joined the band.