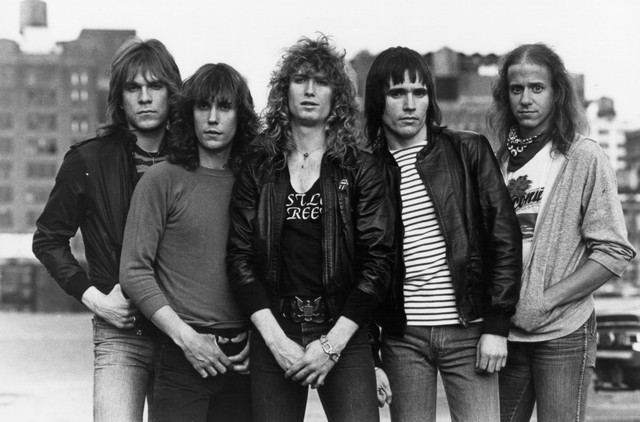 A venerable New York City-born heavy metal outfit that found success in the 1980s via their driving blend of arena-ready hard rock and anthemic power metal, Riot's popularity waxed and waned with the changing musical tides over the years, but they maintained a sizeable fan base overseas, especially in Japan, where they remained a huge draw well into the 2010s. Founded in 1976 under the leadership of guitarist/songwriter Mark Reale -- the band's sole constant member -- Riot is known for their strong melodies and technical acumen, and for the distinctive baby seal face that adorned nearly all of their album covers -- the mascot is affectionately referred to as "Johnny." Since becoming active in the late 1970s, Riot has released nearly 20 studio LPs, with highlights arriving via Fire Down Under (1981), Thundersteel (1988), and Immortal Soul (2011). After Reale passed away in 2012, the surviving members began operating under the moniker Riot V. The original lineup, which included guitarist Mark Reale, vocalist Guy Speranza, guitarist L.A. Kouvaris, bassist Jimmy Iommi, and drummer Peter Bitelli, made their debut in 1977 with Rock City, which was released via Ariola. Kouvaris was replaced by guitarist Rick Ventura, and the group returned in 1979 with Narita, which saw them moving to Capitol Records and gaining widespread attention in the U.K. Iommi and Bitelli were the next to exit, and with the recruitment of bassist Kip Leming and drummer Sandy Slavin, the classic Riot lineup was in place. Tours in support of AC/DC and Molly Hatchet followed before the release of 1981's Fire Down Under, considered by fans to be one of the group's most essential offerings -- Capitol dropped the band prior to the LP's release, but Elektra Records was quick to spot their potential and issued the album to critical acclaim. With the departure of frontman Speranza, however, Riot suffered a major blow. New vocalist Rhett Forrester made his debut on 1982's Restless Breed, but after issuing Born in America a year later, Reale announced the band's dissolution; after forming a new group, the Mark Reale Project, he re-formed Riot in late 1986 with vocalist Tony Moore, bassist Don Van Stavern, and drummer Bobby Jarzombek. The new lineup comeback effort, Thundersteel, appeared in 1988, and enjoyed particular success in Japan. The Privilege of Power arrived two years later, and after adding second guitarist Mike Flyntz and replacing Van Stavern with bassist Pete Perez, the group toured the Far East, yielding the LP Live in Japan in 1992. After 1994's Night Breaker, Jarzombek quit Riot, and was replaced by drummer John Macaluso for 1996's The Brethren of the Long House; Jarzombek returned to the fold to release Inishmore two years later, with Sons of Society following in 1999. Jarzombek left the group again in late 1999 and was replaced by Bobby Rondinelli (Rainbow, Black Sabbath, Blue Öyster Cult), who made his studio debut on 2002's Through the Storm. 2006's Army of One featured a new drummer, Frank Gilchriest (Virgin Steele), and would be the last Riot outing for vocalist Mike DiMeo, who was succeeded by Mike Tirelli. Numerous concerts and festival appearances followed -- as did more personnel changes -- but it would be nearly five years before the group headed back into the studio. 2011 saw the release of Riot's 14th studio long-player, Immortal Soul, which was the last album to feature founder Mark Reale, who died of complications resulting from a lifelong battle with Crohn's disease on January 25, 2012. In 2017, Cherry Red released the Official Bootleg Box, a two-volume set of live recordings mastered from tapes in the collection of Reale's estate. Riot relaunched in 2013 under the name Riot V around a lineup consisting of Mike Flyntz (guitar), Nick Lee (guitar), Don Van Stavern (bass), Frank Gilchriest (drums), and Todd Michael Hall (vocals). The Steamhammer-issued Unleash the Fire arrived in August 2014. That same lineup reconvened for 2018's Armor of Light, which was released via Nuclear Blast in 2018. ~ James Christopher Monger, Rovi