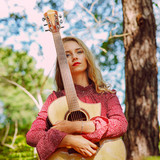 Jildou Bakker is born and raised in the north of the Netherlands. She started at the young age of eight with guitar lessons and soon she wrote her first original songs. She was often inspired by her belief in God, life in general and the stories of people around her. When she was older, her (Dutch) songs gained attention in the Christian scene in the Netherlands very quickly. In March 2017 Jildou released her Debute CD “Openhartig”, recorded at TCC Studios at Veenendaal. The thirteen “singer-songwriter” songs on this album are inspired by the stories of people around you and how God plays a role in our lives. About a year later, Jildou released her first single "Door De Straten", and more after that. Her music mainly fits in the genres "singer-songwriter", "pop", and "country". In September 2018 Jildou started the preliminary education of the study “Composition- and Musicproduction” at the Prins Claus Conservatoire in Groningen, where she started a year later with the Bachelor study which contains four years. With this education Jildou broadened herself to be a versatile music creator. Jildou mainly specializes herself in the subjects songwriting and production. At the moment, Jildou concentrates among other things on her project “The Caterpillar Project”, which she created to release new songs which were born through assignments she did for her study at the Conservatoire. Also she does performances for all sorts of occasions. Mailadres: info@jildoubakker.nl