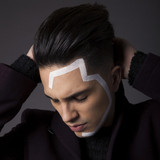 Brazil born UK based artist PUZZLE isn't easy to categorise. His sound is primarily melodic electropop but listen closer and you'll hear elements of soul, future RnB, dance and even gospel - a rich sonic smorgasbord which reflects his musical background. As a teenager he recorded and toured all over Europe with a Brazilian Gospel ministry before settling in the UK where he worked as a session and background vocalist for many household names. PUZZLE has gained over 2m video views across YouTube and Facebook and received support from the likes of Wonderland, Fault, Beat, Popjustice, The 405, 1883, MTV Brasil, Notion and Clash. His first EP Babylon - was released in March 2017.