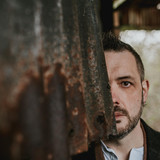 Paul Henshaw and the Scientific Simpletons

Thumping lumps out of his guitar and singing passionately about life and his own experiences, Paul Henshaw is one of the RIOT FOLK family’s hardest workers, touring relentlessly across the UK, Europe and afar. Paul released his latest album, FIVE COMPASS LIGHTHOUSE on November 1st 2019 to critical acclaim, in Paul's words "It's the most extreme album I've ever written" A successful 6 week UK and European tour combining full band and solo shows followed and the single "THROWING LINES" Went to #1 in the Amazon Folk Charts What people are saying FEROCIOUS BLOG FIVE COMPASS LIGHTHOUSE - Feels like quite a journey, whilst maybe not entirely autobiographical or chronological – there’s a sense that this album has developed over a seismic period of Paul’s life and has in that sense provided a documentary of kinds of that journey. And mercifully it feels like a journey that’s heading in the right direction. A fantastic and brave achievement – amazing song writing, and awesome work from the other Simpletons in giving them the depth and intricacies they need – which translate brilliantly to a live setting too. It’s been out more than a month now so hopefully you have it already, if you don’t, then you should remedy that omission post haste.