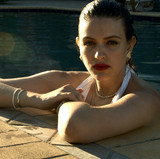 Irini Mando is an urban pop artist and songwriter based in London. Notable for her large range, instrumental abilities and clever hooks, she has written across a range of genres. She has received funding from PRS Foundation to attend ASCAP Expo 2017 in Los Angeles; two months later she was heading back to LA to attend the BPI and MPA’s Sync Mission at Capitol Records. In May 2018, Irini accepted an invitation to perform two shows at Canadian Music Week in Toronto. Her current single Six In The Morning is her first offering since the Eden EP and is produced by Buzzin Producer (Kojo Funds, Wande Coal, Elephant Man, Skepta, Giggs) and mixed and mastered by Arthur Indrikovs (Calvin Harris, One Direction, Clean Bandit, Florence + the Machine). In 2017, her single Surfin' Sky High was supported by VEVO’s editorial team in both UK and US. She has previously worked with the Amy Winehouse Foundation which brought to fruition the title song of her first EP Pink Noise and single Hang, which featured on the Foundation’s very first compilation album under Island Records in 2015.