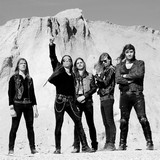 Out of the union of five zealous headbangers, the post-apocalyptic metal outfit Steelwing was established in 2009 and quickly joined the vanguard of the rising Swedish traditional heavy metal scene. Within months of releasing the first demo, a management and record deal had already been secured. The following years Steelwing honed their skills in a trial by fire on a crusade across Europe. Touring in support of giants such as Accept, Blind Guardian and Sabaton, the young Swedes conquered new grounds with their energetic live shows and punk attitude. From massive arenas to small club stages, Steelwing would soon come to prove themselves a worthy headliner name in their own right during the following tours of Europe and South America. The vocal acrobatics, synchronized twin-guitar blitzkrieg and fierce rhythm section proved to be a winning combination in the studio as well: from the critically acclaimed debut album Lord of the Wasteland (2010) to the hit-packed sophomore release Zone of Alienation (2012) and the groundbreaking reinvention Reset, Reboot, Redeem (2015), dystopian visions and uncompromised quality have always been reliable constants in the Steelwing doctrine. Feeling content with their achievements and ready to move on to new ventures, Steelwing disbanded in 2016, heads held high.