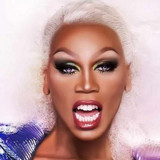 Since 2009, RuPaul Charles has executive produced and hosted the reality competition series RuPaul's Drag Race. The show, now in its 12th season, has won six Emmy Awards and has sparked several spin-offs. The most commercially successful drag queen ever, RuPaul was included in the Time 100 list of the world’s most influential people in 2017. A San Diego native, RuPaul became a popular fixture on the nightclub scene in New York City. He achieved international fame with the single "Supermodel (You Better Work)" from his 1993 debut album. He has 15 studio albums to date. In 1995, he became MAC Cosmetics’s spokesperson, raising millions for the MAC AIDS Fund and becoming the first man to land a major cosmetics campaign. The next year, he landed a TV talk show on VH1. He has appeared in over 50 films and television shows both in and out of drag. He also has published three books.