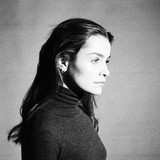 Music has been a part of Eydís Evensen’s life from a very early age. A classically-trained pianist and post-classical composer, Eydís started taking piano lessons at the age of six in her hometown of Blönduós, Iceland and composed her very first piece of music on the instrument – about a storm that was raging outside – when she was seven.

After graduating from Reykjavik’s Hamrahlíð College – where she sang in the world-renowned choir run by Þorgerður Ingólfsdóttir, which counts Björk and members of Sigur Rós among former members – she planned to go to Vienna to continue her studies, but after becoming disillusioned with the classical world, she decided to take a different path. Spells were spent living in London and New York while traveling extensively. Although Eydís cites her home country of Iceland as still being a huge influence on her music, she is also profoundly inspired by forces of nature as well as artists such as Philip Glass and Thom Yorke. But the real driving force behind her mournful, melancholic and incredibly beautiful arrangements is her own emotions, and having the full freedom to explore those feelings musically however she wants, while also attempting to break free from regular forms of music. Photography by Saga Sig