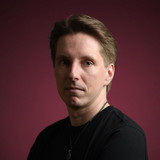 Simon "Vivid" Jarosch was born in Stuttgart in the western part of Germany. In his youth, he enjoyed the virtual escape of painting pixels and composing chipsounds in the Atari ST demoscene. With the advent of the Internet, he released tracker-music through pioneering netlabels like Kosmic Free Music Foundation and Radical Rhythms. When AltaVista was the premier search-engine, he created his first homepage. One Night, his debut CD album, was released at age eighteen and earned him the title of wunderkind by Germany's music magazine Groove. The track Pulse Code was discovered in the UK by John Peel for BBC radio - teenage dreams so hard to beat. It gained him the top spot in the drum & bass charts on the first Internet streaming site www.mp3.com. It was also voted #1 electronic track on the site by URB Magazine, America's leading dance music publication then. In 1998 he co-founded the German drum & bass label Santorin with his colleague DJ Lightwood in Tübingen, where he released his first vinyl record. The time was right in 2005 when his well-received longplayer Because We Can came out - as a producer he was already called a "veteran of the German drum & bass scene" by De:bug Magazine.